An interview with Leigh aired on Thursday, August 9, 2007 at 4 p.m. on "Calliope's Corner -- Where Poets and Songwriters Meet" hosted by Paula Curci on 88.7 fm radio & on the internet at WRHU.ORG

The 1/2 hour interview was conducted by deejay Paula Curci of WRHU Radio Hofstra University - Hempstead, NY on July 19, 2007, and first aired on Thursday, August 9th, at 4 p.m.  Leigh performed her music and poems live on the show.  Click the links below to watch the three brief parts of the YouTube videos, accompanied by a slide show of photographs of Leigh.
Leigh In the News 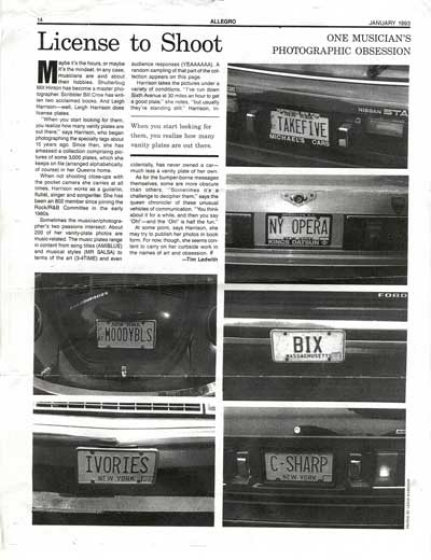 Leigh Harrison has been performing her unique songs at concerts, clubs, and on the radio for many years.  However, interestingly, one of the articles written about her and her work was not about her music.  It featured a story about one of her hobbies: photographing license plates.  Below are copies of the article by Tim Ledwith which appeared in the January, 1993, Allegro, the official publication of the Musician's Union, Local 802, New York City, full size and in close-up. 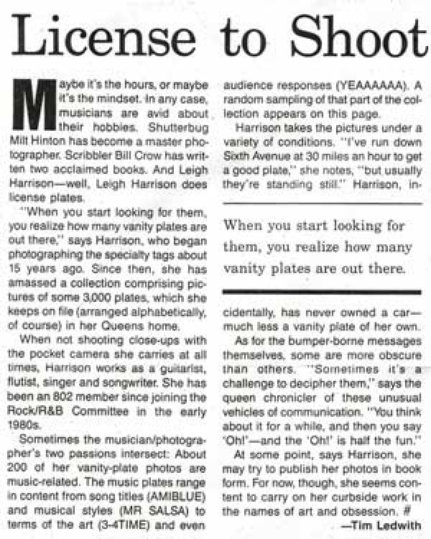 Leigh / Featured Guest on "Calliope's Corner" WRHU / Part III / Host: Paula Curci / 2007
Below are (1) a review of Leigh's new CD with her duo, "BlueBird," from a CT music magazine, (2) an article by Michael Perlman, who interviewed me for the Forest Hills Times, (3) links to the Paula Curci interview for "Calliope's Corner" with Leigh that aired on WRHU, and (4) an article that appeared in the NYC AFM (American Federation of Musicians, Local 802) newspaper, The Allegro.
The article below was written after Leigh was interviewed by Michael Perlman, a reporter for the Forest Hills Times.  It appeared in the March 2017 issue; the version of the article below is from the online (color) copy of the newspaper, which is published in Queens, NY.

Here' the review of BlueBird's new CD, "BlueBird At My Window," written by noted blues vocalist, Sue Menhardt, and which appeared in the October 2018 issue of CT music magazine, "SoundWaves."