Leigh began writing songs early in life, and counts among her mentors the songwriter Paula Hoffman, who wrote "This I Like," which was performed by Dinah Shore. Because one of Leigh's aunts was good friends with Paula, Leigh met Paula at her Florida home, and Paula gave her an autographed copy of the sheet music for the song. This event was an early inspiration for Leigh to try her hand at song- writing. Leigh began writing poems and songs in her childhood, but honed her songwriting skills over the years; by the time she was in her twenties, she'd already written over 100 songs. At present, she has written hundreds of songs.
Leigh Harrison
Music Biography of
Leigh Harrison's career as a vocalist started by chance, when she was part of a small circle of women who gathered to sing in San Francisco, in an attic furnished only with a few pillows to sit on, and wooden crates and cable spools for tables. Leigh was still very young, and the other women were all more experienced singers. One of the other women was Janis Joplin -- it was Janis' house and attic in Haight-Ashbury in which the women met. And it was from these hours singing together with Janis and other blues women in SF in 1968 that Leigh learned the folk-blues that became an essential part of her repertoire from those early years on. Leigh has said of those times that "I was the youngest of the girls and women that gathered in Janis' attic, but she always treated me with courtesy and kindness, and it was directly from Janis that I learned songs such as 'I Know You, Rider.' 'Hesitation Blues' and 'House of the Risin' Sun.' Leigh also met Malvina Reynolds, Phil Lesh, and Jimi Hendrix during her time in San Francisco.
As a singer-songwriter at Gerde's Folk City's open mic nights, back in the 1970's, Leigh was part of the wave of performers introduced by the MC, Richard Lewis, who was honing his material during his early days as a stand-up comedian. Interestingly, when other performers at Gerde's asked Leigh (who then spelled her name "Li") if she was trying to "get a record deal," she often replied that she wanted to put out her own records, having been influenced in her childhood by seeing independently-produced 33 1/3 records by a group called "Jamie and the J's," a vocal group that also recorded radio commercials.

Leigh has said "It was always my intention to produce my own record, with my own cover art and my own choice of material. I never wanted to be an artist manipulated by a record company. I always expected to -- someday -- put together my own records, with complete control over the product." As a result, Leigh never put out a record until she was ready, artistically and financially, to choose her own producer, pick her own material, and design her own cover art. But even though it took her years before she was able to do so, her intention to do it all on her own places her as one of the earliest rock recording artists to choose an independent or "indie" career path. In the intervening years, Leigh was known variously as "Li Harrison," Iris Merritt," or "Lola LaPlume" in different bands, and she appeared as "Mona Moore" for years on "The Coca Crystal Show" on MNN in NYC, where she was one of the Technical Directors of the show, and also known for performing her original lyrics that parodied the political/social issues of the day. 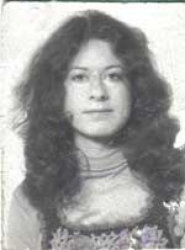 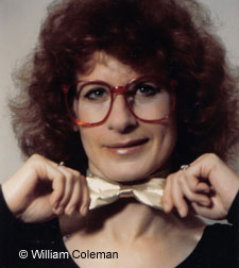 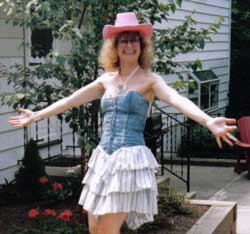 This photograph of Leigh was taken circa 1990,
after she returned from a vacation to Nashville,
where she bought the ruffled dress and pink cowgirl hat. The pix appears, PhotoShop'd, on the cover of Leigh's 2nd CD, "Oh, Wow!" n the interim, this ruffled, layered style of skirt became all the rage!
* * *
Leigh is currently selecting material for her third CD. Some of the songs have been recorded at Stardust Studios. Producer Marino Frost has worked with numerous artists, including former members of "Curtis Knight and the Squires" (who played with Jimi Hemdrix in the late 1950's to early 1960's). In an unusual coincidence, Leigh also knew Jimi Hendrix back when she lived in SF, but it was in the late 60's -- when Jimi worked with "The Experience" -- and she also has played with Moogy Klingman (formerly in Utopia with Todd Rundgren) who also sat in with Jimi in NYC in a group called "The Blue Flames." Clearly, the blues has informed much of the music that Leigh writes and performs, as well as having been the glue that cemented many a musical friendship. Leigh is recording original songs for her next singer-songwriter CD, as well as her original guitar instrumentals, several children's songs, and a collection of song parodies.
Leigh was a music major during some of her college undergraduate years, and also studied guitar for many years. One of her jazz teachers was Woody Mann at the Guitar Study Center (incorporated into the New School.) Leigh plays acoustic and electric 6 and 12-string guitars, Dobro, banjo/guitar, and diatonic African flute; she has played percussion and performed as a back-up vocalist with numerous blues, rock, and country bands, including Bokum Road, Graft, Sweet Cash, and The Nite Owls.

"BlueBird" is a musical duo featuring Leigh on vocals and guitar, and her long-time musical collaborator, Bobby Perfect, on guitar (or bass) and vocals. Working in a duo gives both Bob and Leigh the opportunity to "stretch out" a bit as musicians. As Leigh puts it, "I always enjoy working with Bobby for the wonderful lead work he adds to my songs; he always PLAYS TO THE SONG, and his music is lovely, lucid, and powerful." In 2017, BlueBird's first CD, "BlueBird At My Window," was released.
Leigh has written hundreds of songs, in varied genres, and many have been performed by other artists, including CeLange, who included the song, "Cruisin' For a Bluesin'" on their first CD. Leigh's compositions are truly eclectic, ranging in style from blues to country-blues, country to country-rock, and rock to rockabilly. She has also written pop songs, R 'n B, Dixieland, Hawaiian songs, brief classical pieces, song parodies, and children's songs.
This photograph was taken circa 1972, during the years when Leigh first began to perform (as Li Harrison) at open mics at Gerde's Folk City in Greenwich Village, NYC.
Leigh has performed at numerous venues in the U.S. and abroad. After early performances at Gerde's Folk City, she sang solo or with bands in clubs throughout the NYC area. 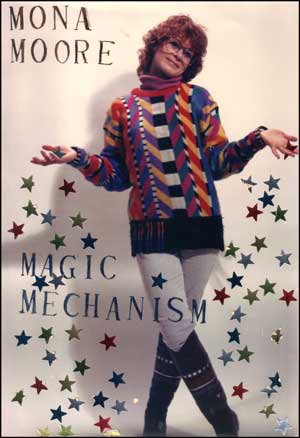 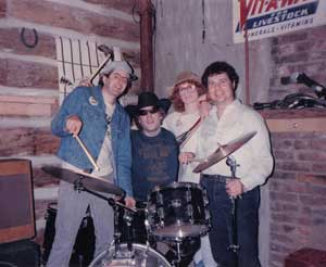 The poster above is a promo shot from days when Leigh played with her band, Magic Mechanism, featuring Leigh (vocals & guitar), with Bobby Perfect (lead guitar), Steve Zavack (bass), and Zebra (drums).  At that time, Leigh was playing under the name, "Mona Moore," a stage name under which she performed in the late 1980's and early 1990's.
In the photo at right are Bob Perfetto (guitar), Zebra (drums), me -- then performing under the name "Mona Moore" (vocals, guitar & percussion) ,and Steve Zavack (bass), around 1989, soon after forming our band,"Magic Mechanism," (later "Jukebox Jamboree") on stage after a gig at Albuquerque Rodeo Bar in NYC, just after the bar's then brand-new back room opened (which was still not finished being decorated). We were the possibly the very first band to perform at the venue.
Photo by William Coleman, ca. 1980
Leigh (on vocals & percussion), along with Bobby Perfect (lead guitar & vocals), David Gerstein (bass), and Lyall Croft (drums) formed a band in 2012 called BLUE RHYTHM SANDWICH. The band has already uploaded a few videos of performances at NYC's Desmond's Tavern, and elsewhere in the tri-state area. A video of Bob singing "That Train Don't Stop Here Anymore" is on YouTube, as is a mini-medley of the band performing "Venus" and "For Your Love." The band members are all currently involved in other projects.

However, Blue Rhythm Sandwich has worked in the studio, recording some tracks, and a few of those tracks have already been uploaded to the SoundCloud. Search "Blue Rhythm Sandwich" for tracks that Leigh sings ("Fallin' " and "Jump, Jive, and Wail"), songs that Bob sings ("Flat Foot Sam" and "Just a Little Bit"), and the blues instrumental, "Chicken Shack." To read more about Blue Rhythm Sandwich, go to our website: www.songcrew.com/brs

In April, 2015, Leigh co-produced the "SongCrew presents BABES ON BOARD" a female-fronted band extravaganza, at Desmond's Tavern, NYC. The next Babes On Board event in March 2017 featured her own band, Blue Rhythm Sandwich, along with their friends Someone You Can X-Ray (from CT). The next event is being planned, and will feature female singer-songwriters!

Leigh's duo with Bobby Perfect, called "BlueBird," finished a duo CD entitled "BlueBird At My Window." It's filled with folk-blues and country-blues material that Bob & Leigh have loved and performed for years. The CD is now available whenever Leigh performs. You can read the review printed in the CT music magazine, SoundWaves, reviewing "BlueBird At My Window" on the BlueBird page of this website.

During the COVID pandemic, Leigh began working with a 4-piece string band in CT called HOT STRINGS CAFE. The band's members are all lifelong musicians with -- collectively -- over 200 years of playing and performing experience. They have performed at the events for Make Music America day, and there are videos and audio tracks you can link to on their website -- www.songcrew.com/hsc

Guitarist
Current Recordings
Performances
Early "Indie" Artist
First Two CD's
Early Years
Current Musical Projects
Leigh found her first CD's producer when she began working with Nick Holmes of Pantry Music. His vision so closely matched Leigh's in terms of instrumentation, arrangements, and production, that she also worked with him on her second CD, "Oh, Wow!" Leigh has always been very proud of her first two CD's. The first CD, entitled "Eclectic Chanteuse" was released by SongCrew Records in 2003, at a CD release party at The Back Fence in Greenwich Village. The second CD, "Oh, Wow!," was released in 2010, at a CD release party at Sapphire Lounge in NYC.
Songwriter
Among the bands Leigh has worked in as a vocalist are "Presents of Mind," "High Park" (Toronto, Canada, 1978), "Suite Dreams," "The King Biscuit Blues Band," "The Night Owl Blues Band," "Magic Mechanism," "Jukebox Jamboree," "Cheyenne Social Club," and "BlueBird." Back in the early 1980's, noted music press photographer Russell Reif described Leigh's voice as "whisky with a shot of honey," and, by others more recently, her voice was described as "a smoky alto," and capable of variety within a performance, going from "funky to sultry to sweet."
Vocalist
Leigh's MUSICAL BIO -- her history as a guitarist, composer, performer, and singer-songwriter.... 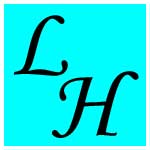