" From A to Zeus "
ISBN # 978-0-9838417-2-2 $20
Soft cover / 100 pages
Full-color illustrations
Move over, Bulfinch and Hamilton  everything you need to know about mythology, emotion (especially love), and the fount of creative pulse and impulse is right here in Leigh Harrisons sumptuous binge From A to Zeus. Reading these lyrical poems, it is clear that Ms. Harrison composed the heavenly lines from atop Mount Olympus, with the Muses whispering in her ear. Harrison skillfully and perceptively draws parallels of vengeance, domestic violence, and of course lust, from myth to modernity in a generous language that burns and burnishes, as far-reaching and penetrating as Cupids bow, and she does it with her trademark peacock-inspired colors and flair. From controlled meter to wild and woolly rap (check out Hades Blues), from the Old Testament to the present, Leigh Harrisons poetry is written in the magical/musical manner that fans of hers have long known is deeply embedded in her fingers and her soul. These heroic poems are ambitious, epic, and ethereal; Zeus Rocks Out gives new meaning to the phrase supreme god on high and one thing is certain: From A to Zeus will soothe you, bedazzle you, bathe you in mythic debauchery, and stir your earthly passions. 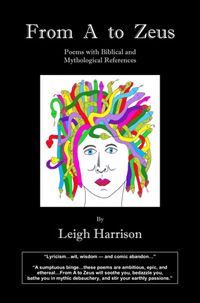 Leigh Harrison has brought us a poetry collection that stands out in brilliant contrast from most contemporary verse. In an age of formlessness, she displays a subtle mastery of poetic forms, particularly of the sonnet and sestina. But she combines this mastery with an intensity of feeling that vividly animates these forms. She has explored the writings of the great religions and their rich mythology to produce poems that are provocative, amusing, and at times profound.

Dr. Robert K. Kramer, Poet, playwright, critic and translator of European Literature
There is eloquent craftsmanship in these pages, forging psalms and love sonnets that Shakespeare would appreciate. Ms. Harrison exhibits a command of the English language that reveals an understanding and ability to interpret history and myth with a resounding gift of lyricism, empathy, wit, wisdom  and comic abandon. There are bright surprises for all who harken here.

Su Polo, Founder and Curator of the Saturn Series Poetry Reading, NYC
Leigh Harrison's deep knowledge of her subject matter is praiseworthy, and her storied poetic responses to the canon of timeless classic and historical literature reflect a rich love of language, and a clear respect for diverse poetic form. Leigh Harrison is a prolific, mellifluous poet who energizes language with deliberate passion. Artist Rosie Rinsler's vibrant illustrations dress From A To Zeus with vivid, dreamlike explosions. This collections a must-have for continued sumptuous literary pleasure.

How your pale wings were shining in the sun,
and how they flapped and swooped through azure skies!
I watched. The sun was pouring gold on one
wing, then the other, flaming your dark eyes
above the rock-strewn earth. And Grecian fields
were splayed below, a patchwork lush and bold
with harvest fruit. The orchards lavish yield 
red grapes and olives, amber turning gold.

Along the cliffs, the sea, aquamarine.
You wheeled and with your father, soared toward blue 
toward kestrels, clouds, horizons you had seen 
and flew as none before you ever flew.
Those words forgotten, not to climb too high,
you sailed aloft into a cirrus cloud;
dire words ignored, with the hawks you'd fly.
(Whom gods destroy, will first be made too proud.)

By noon the sun was fiercely blazing down 
your wax wings melting, feathers floating free;
through cumulus, your flailing arms spun round,
you plunged with awkward grace into the sea.
ZEUS ROCKS OUT


He stretches his buffed and perfect body,
arises from his golden throne on Mt. Olympus.
Unicorns graze nearby, Eros jauntily tools
around in a Corvette convertible. A peacock struts
in the shade of an ancient, giant cypress tree.

Zeus text-messages his administrative assistant,
Circe, reminding her to have his Hummer ready
at the foot of the mountain in ten minutes,
and to be sure his two electric guitars are inside
along with the cables. He reminds her to have
amplifiers and mic stands packed.

He looks around for his surly driver, Loki,
on loan from Asgard while Hercules labors
during his vacation. He hops into the back seat
and lights a Cuban cigar. At a traffic light,
the groupies pile in  a few of the Pleiades sisters
and one of the Sirens. He fondles each of them
for a few minutes as the road unwinds,
engages in some sensual lip-locking with Circe
before getting two-on-one action with a sprite
and a mermaid that somehow sneaked aboard.

Night falls. The sexed-up group in the back
of the limo are joined by the rest of his entourage 
his band, Jason & The Argonauts, and backup
singers, Echo and Calliope. Athena lights a joint,
passes it to Zeus, and then rolls a few more 
primo Panama Red, mixed with hashish.
They all bliss out, arrive at the stadium
stoned and giggling. Zeus heads backstage,
where hell change from his simple white tunic
to a spandex muscle tee and torn denims.

The Gorgons will be doing security tonight.
Backstage, Poseidon and Hermes have placed
nectar and ambrosia on the buffet table,
along with the requisite wine-dark M & Ms.
Zeus smiles wickedly at a nearby centaur,
gives him a big thumbs-up as he straps on
his cherry-red Fender guitar and strides onstage.

Magic hangs in the air like paper lanterns.
See www.wordcrew.org to order
Below are two sample poems in "From A to Zeus, along with one of the illustrations from collection. 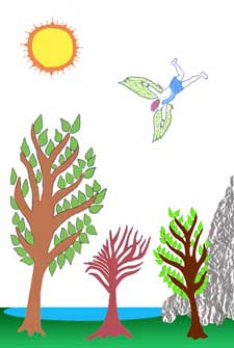